François Lalut, the entrepreneur of the year. 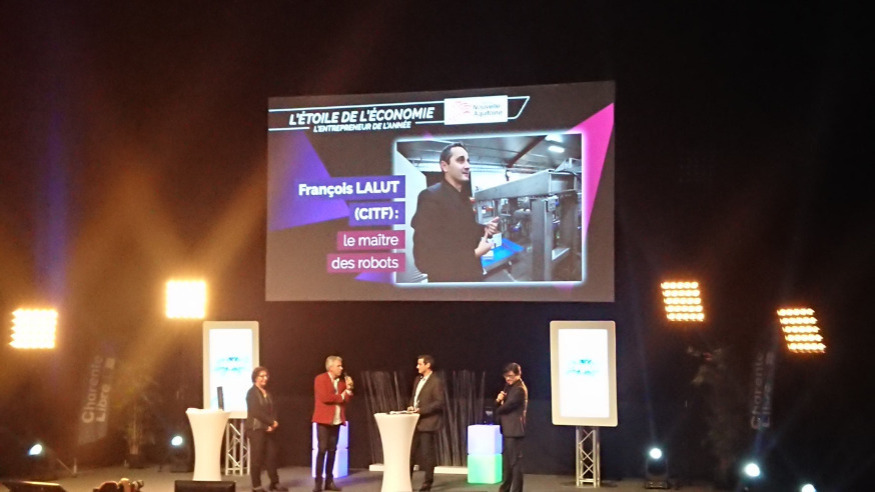 This Wednesday December 13th was held at the Espace Carat in Angouleme the “Charentais of the year” ceremony, hosted by Charente Libre. During this evening François LALUT received for the second time the “ETOILE DE L'ECONOMIE”, award that rewards the entrepreneur of the year.

This award brings out an important year in the rise of our society. Indeed, CITF, which exceeded the threshold of 40 employees by the end of 2016, almost doubled its workforce after one year. Those recruitments are the result of an order book full as ever. Regional industrials from every sector, keep trusting our team by assigning them more and more important projects. CITF has signed by the way two large-scale contracts in addition to the hundreds of orders received this year which allows to have a visibility over more than a year.

But the rise of CITF does not stop here! Thanks to ALIEN project (a MOG optical sorting robot), the fruit of a collaboration between the Bordeaux company JGC and our R&D department, CITF goes abroad to conquer the premium and ultra premium wineries market and plans to move to the US in 2019.

In France our projects are just as buoyant with premises growing and an internal restructuring to be more efficient and responsive to the needs of our many customers. In order to improve our PROCESS, SUPERVISION and DEVELOPMENT businesses, CITF is reorganizing its strategy around several areas. We hope to exceed the threshold of 100 employees within 3 years.

These ambitions are the reflection of a perfect agreement between a management on a human scale and a daring team. CITF can count on its employees who are involved and motivated by the corporate project and banks on a qualified team, present from the beginning and a very low employee turnover. Team spirit has always been a major asset in the success of CITF! 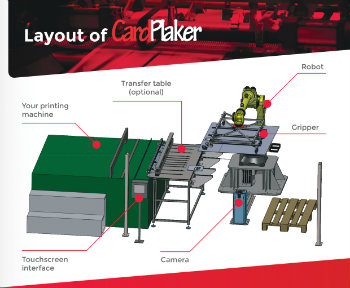 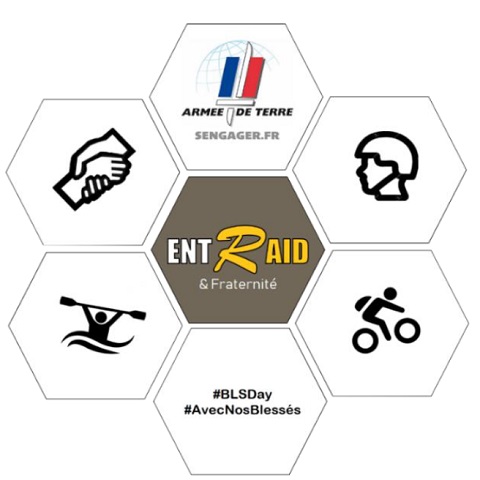 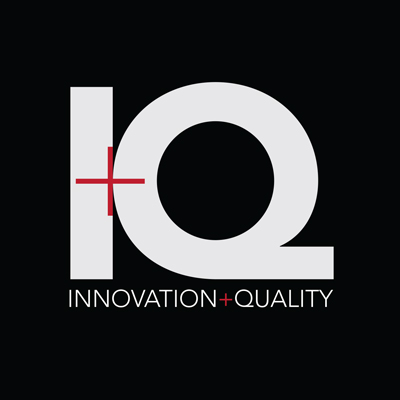 On May 22nd & 23rd, will take place IQ, a forum for premuim & ultra-premium wineries from California, focused on innovation. Once again, CITF will attend to this exhibition (booth 124). [Read more] 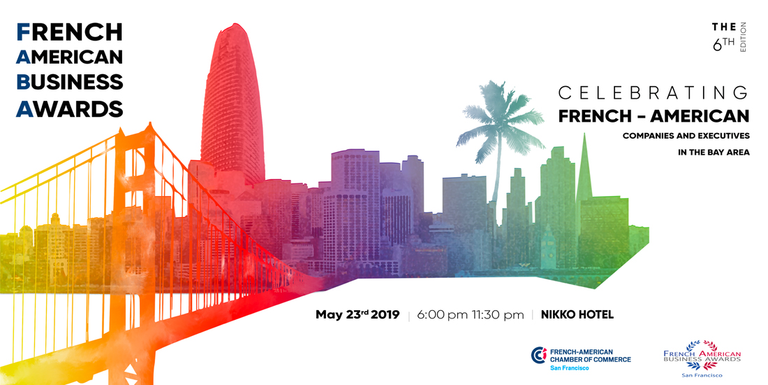 We are pleased to announce the nomination of CITF for the French American Business Awards 2019 in the category "Wine Country Awards". During a dinner celebration, the best French and American [Read more] 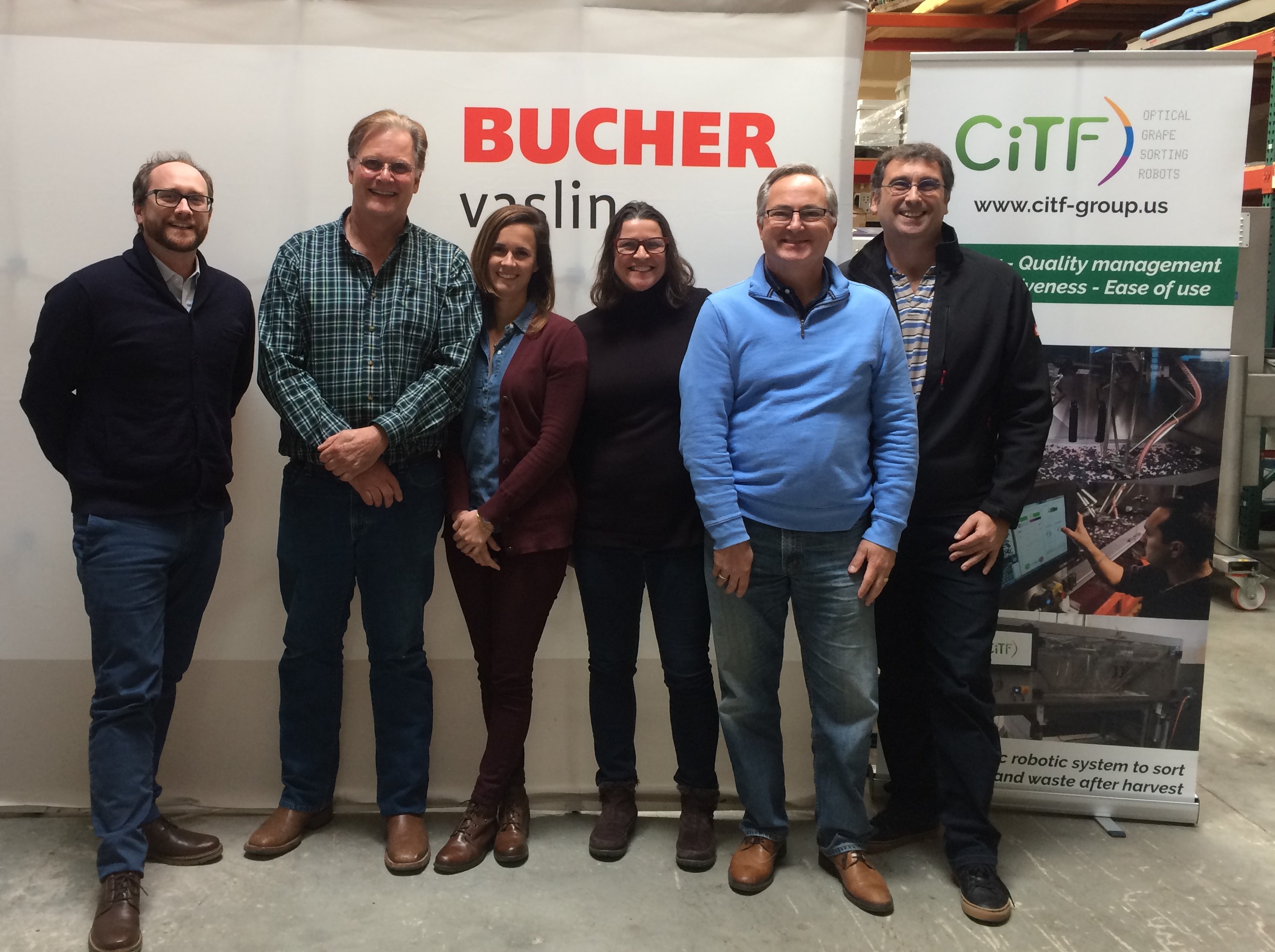 CITF Group Inc is proud to announce its partnership with Bucher Vaslin North America (BVNA) since December 2018 for the distribution of its high-tech grape sorter ALIEN. In the end of January 2019 [Read more] 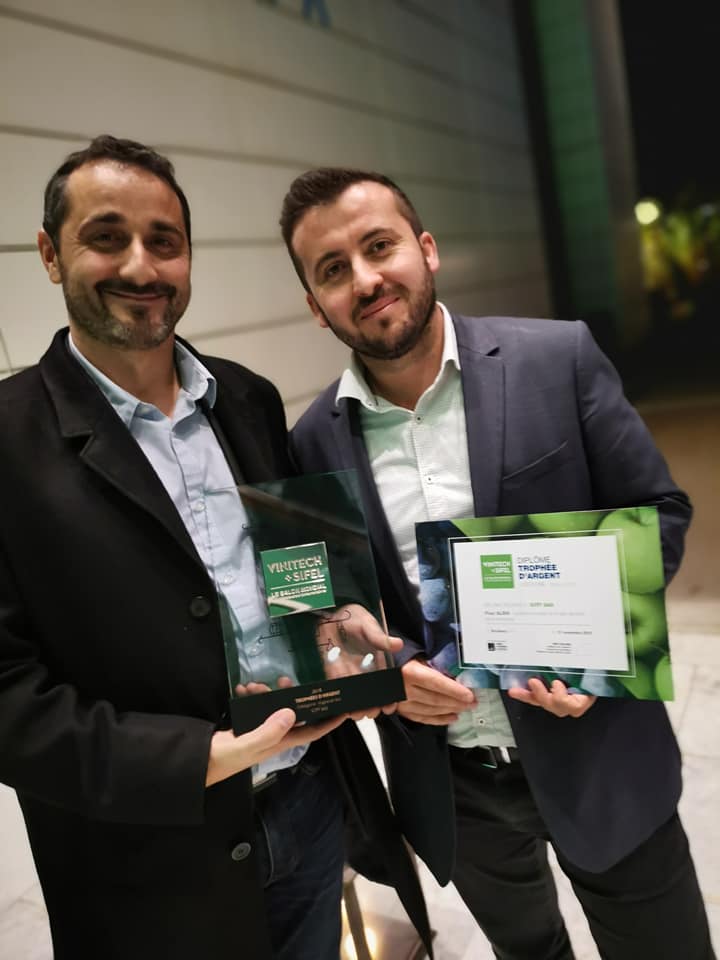 CITF is very proud to announce that Alien, its high-tech grape sorter, received a prestigious ‘Silver Award’ at the Vinitech-Sifel Exhibition in Bordeaux this past November. [Read more] 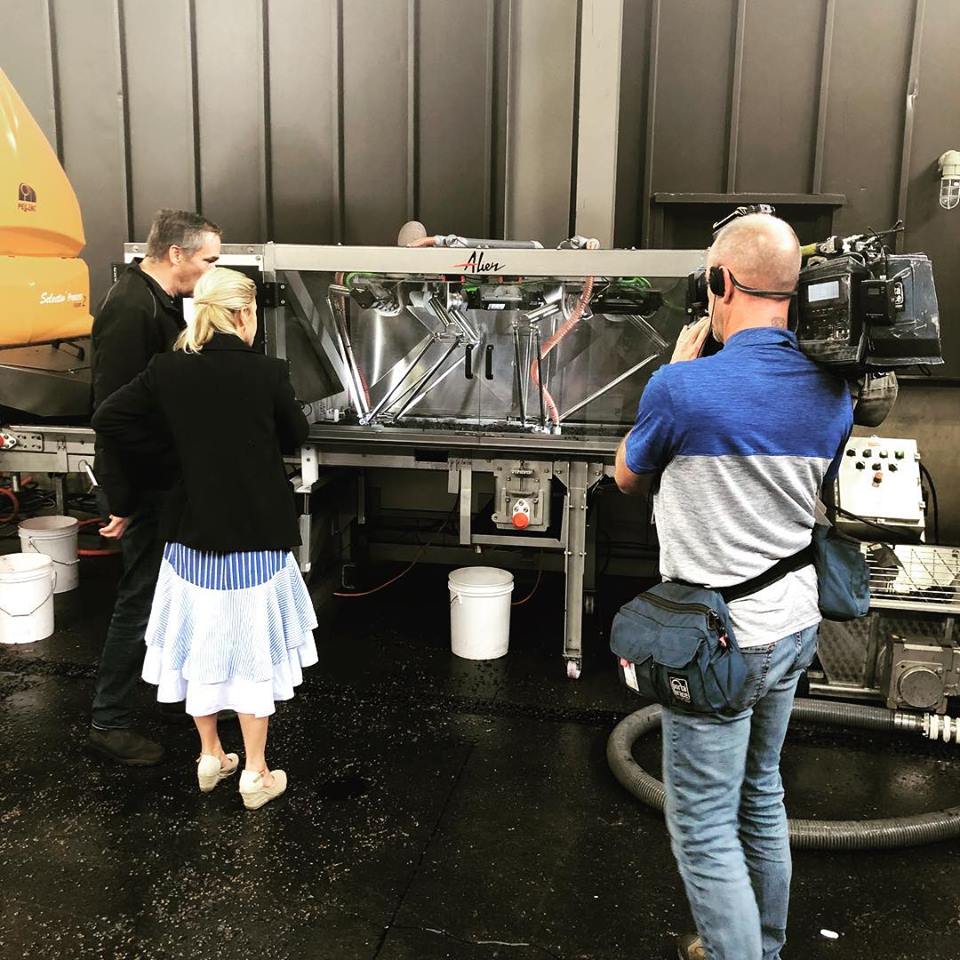 ALPHA OMEGA WINERY welcomed reporter Emily Turner and photographer Scott Eason from @kpixtv (CBS affiliate in SF) to the winery today for their piece on automation during harvest. [Read more] 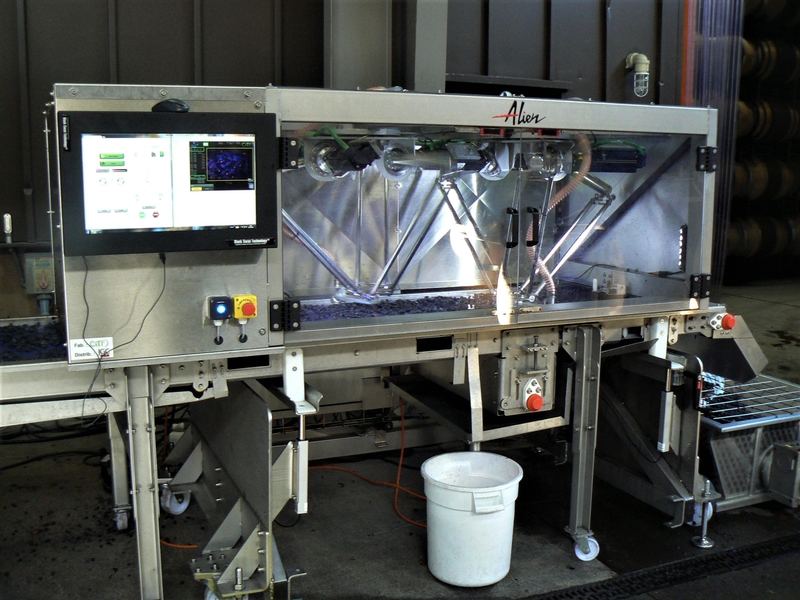 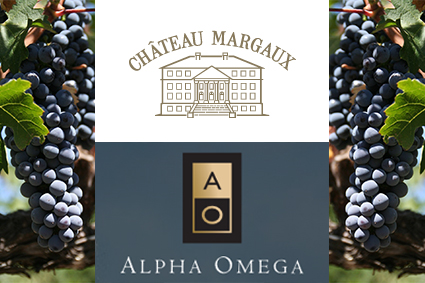 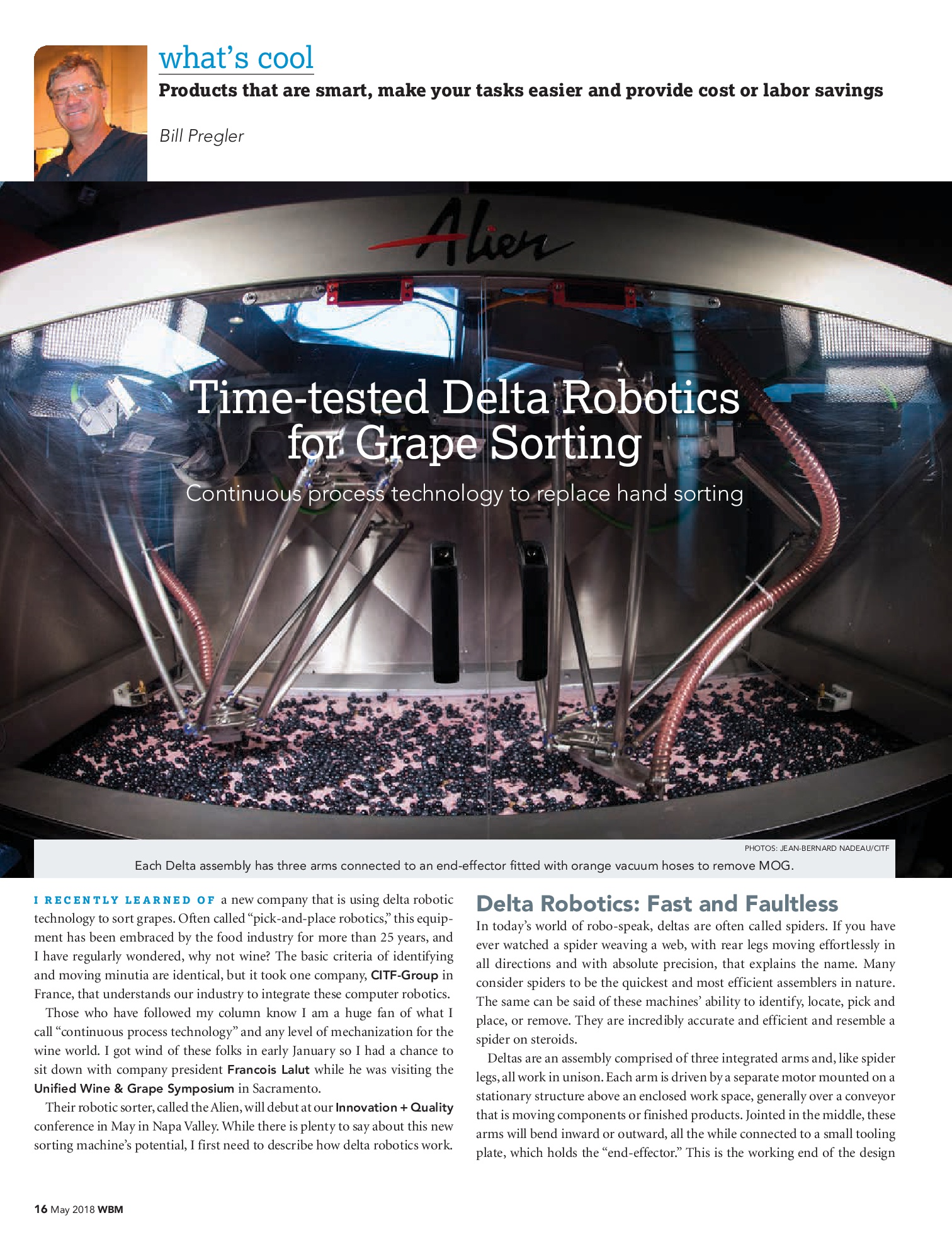 WINE BUSINESS MONTHLY magazine dedicates 3 pages to CITF and its robot ALIEN. To discover more about ALIEN, meet us May 23 and 24 at IQ! [Read more] 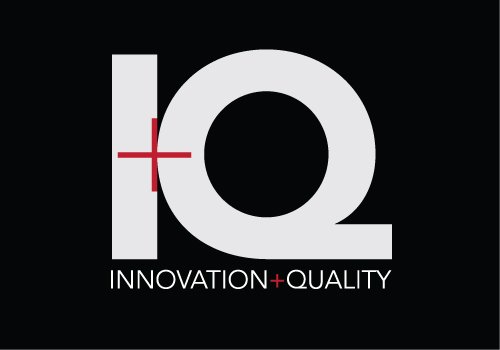 ALIEN takes your harvesting into the future The disruptive optical grape sorting robot is unveiled in the US for the first time. Exclusively at IQ 2018! [Read more]

ALIEN takes your harvesting into the future. This disruptive optical grape sorting robot is unveiled in the US for the first time. Exclusively at IQ 2018 ! [Read more] 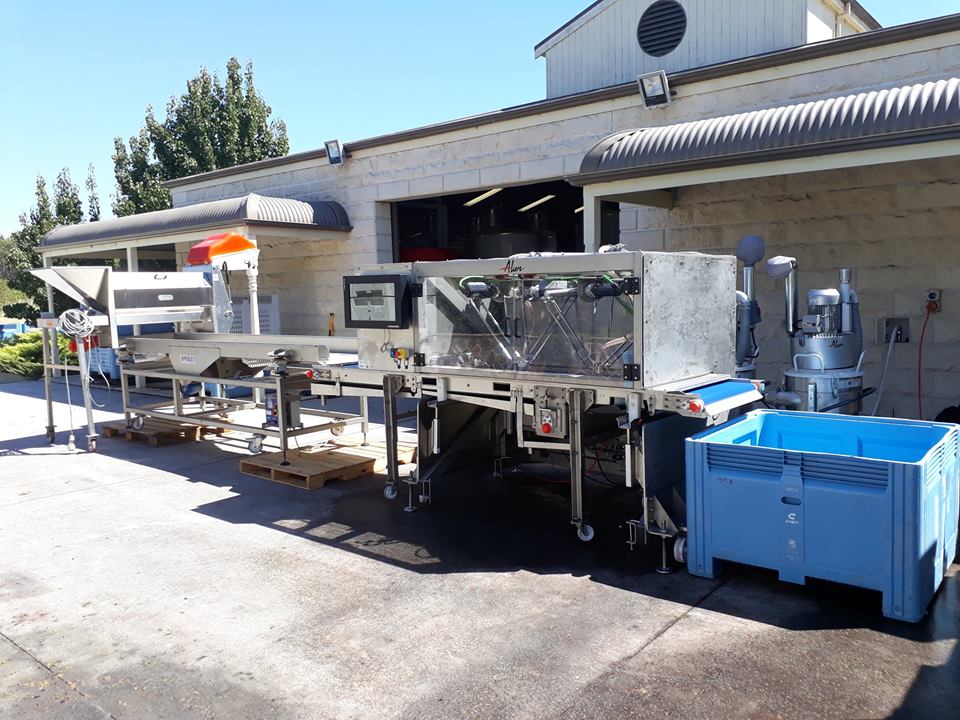 To enjoy the australian vendange, ALIEN flew to the Southern hemisphere escorted by two CITF technicians. This was the perfect occasion to test all the adjustements made on the machine since the last [Read more]

On October 16th 2017, François LALUT was present at the Montmartre Vendange Festival in Paris for the presentation of the National Wine and Digital Awards. These prizes awarded by French Tech Culture [Read more] 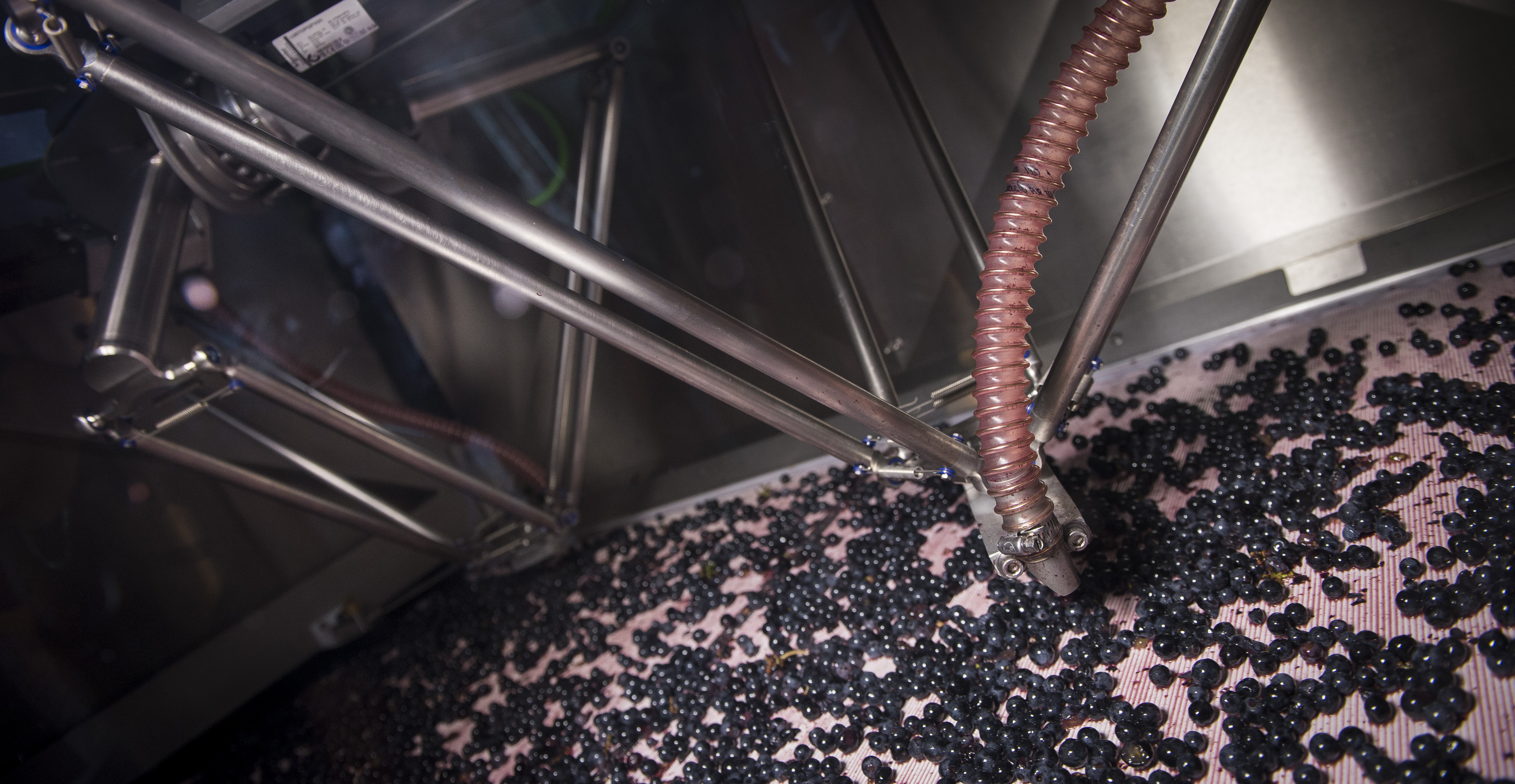 ALIEN, our optical grape sorting robot developped in partnership with JGC company has made its first demonstration during the 2017 vendange at Bordeaux Château Calon Segur and Château Haut Bailly. [Read more] 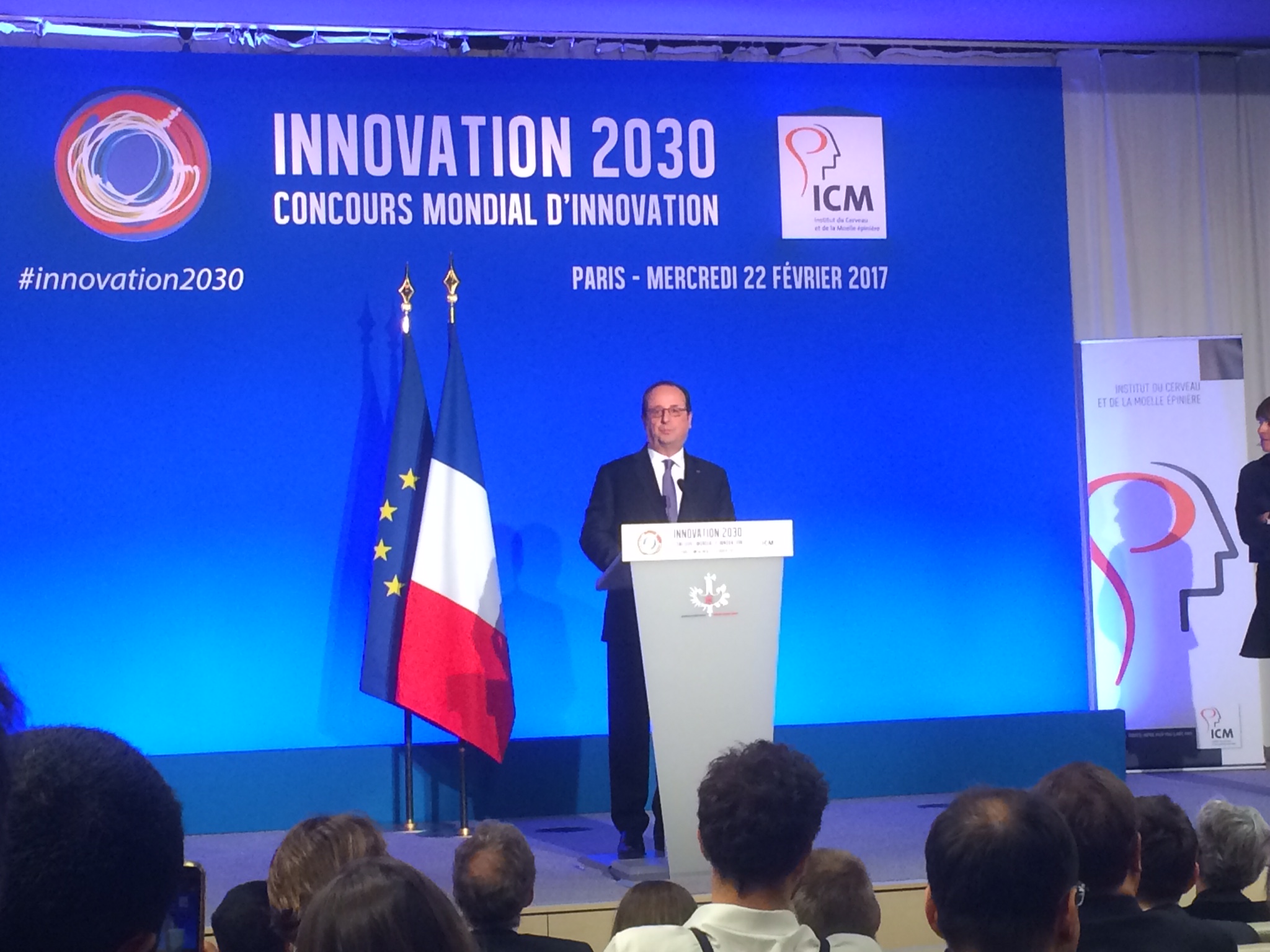 On this Wednesday, February 22nd CITF was François Hollande’s guest at the ceremony in honor of the qualified competitors of the 3rd stage of the World Innovation Contest. [Read more]